The Baldivis Sporting Precinct project for the City of Rockingham involves the installation of 72,000m2 of Village Green premium kikuyu Jumbo Rolls.

Turf Installation will continue on the two remaining ovals in January with completion set for early February. 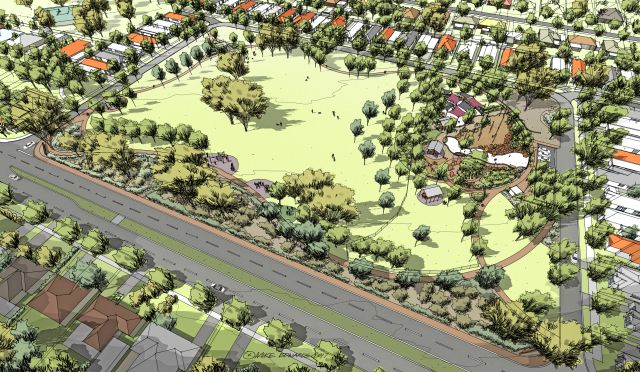 With plans for a $6.8 million upgrade of Robinson Park being approved earlier this year, the project is now at the stage for turfing to commence.

Greenacres Turf Group will be installing 21000m2 under sub contract in the coming months. 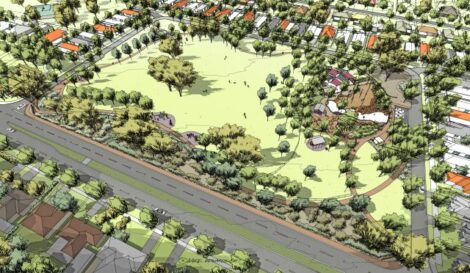 A 42-lot residential subdivision will be created around this large park, which will feature a state-of-the-art children’s playground, barbecues, seating, public toilets, lighting, street parking, a dog exercise area and extensive landscaping. 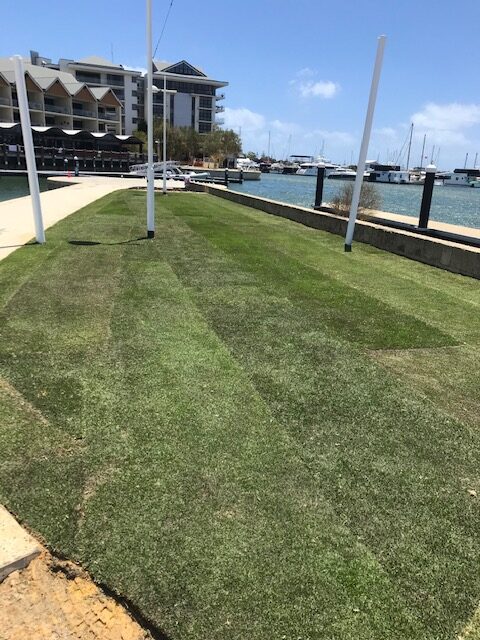 Under very trying conditions, the Greenacres installation team were able to have this project completed in time for Christmas.

A total of 400 jumbo rolls of Village Green was installed at Keith Holmes Reserve. 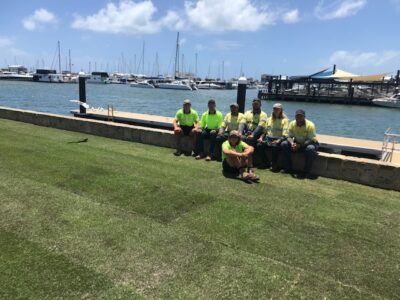 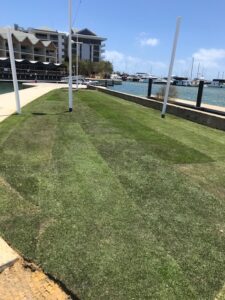 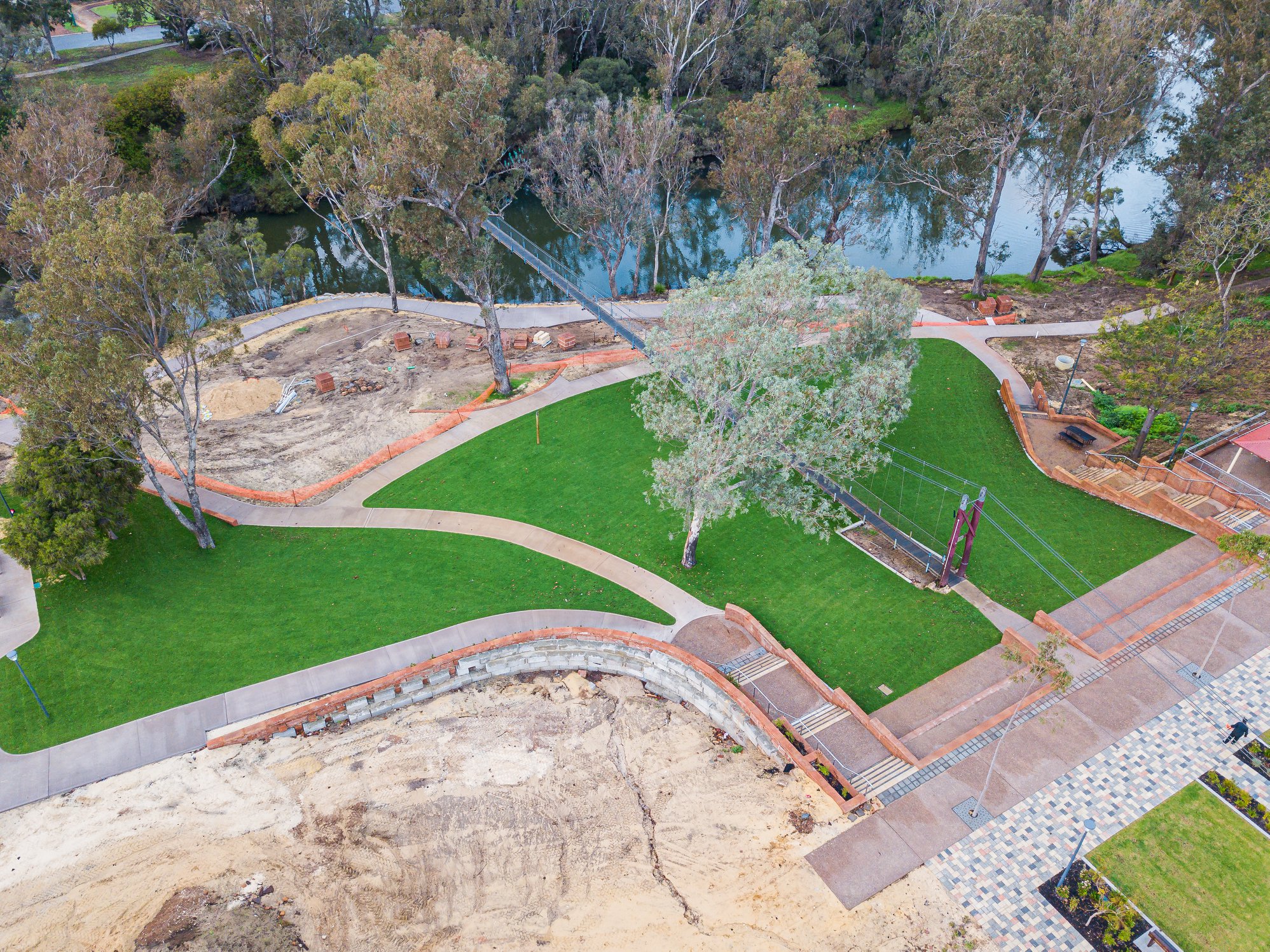 Village Green Turf was installed by Greenacres in May 2020 to finish off the foreshore area of the project.

The redevelopment will enhance the character of Pinjarra, encourage activity, longer visitation and a diverse range of formal and informal activities including events in both the square and foreshore areas. 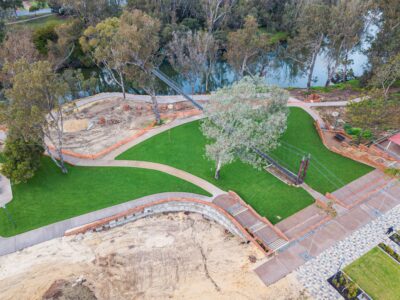 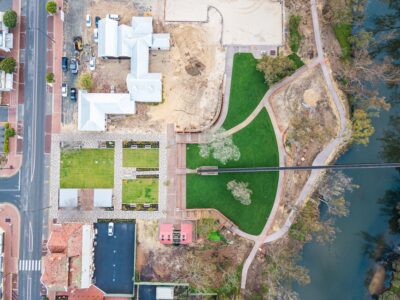 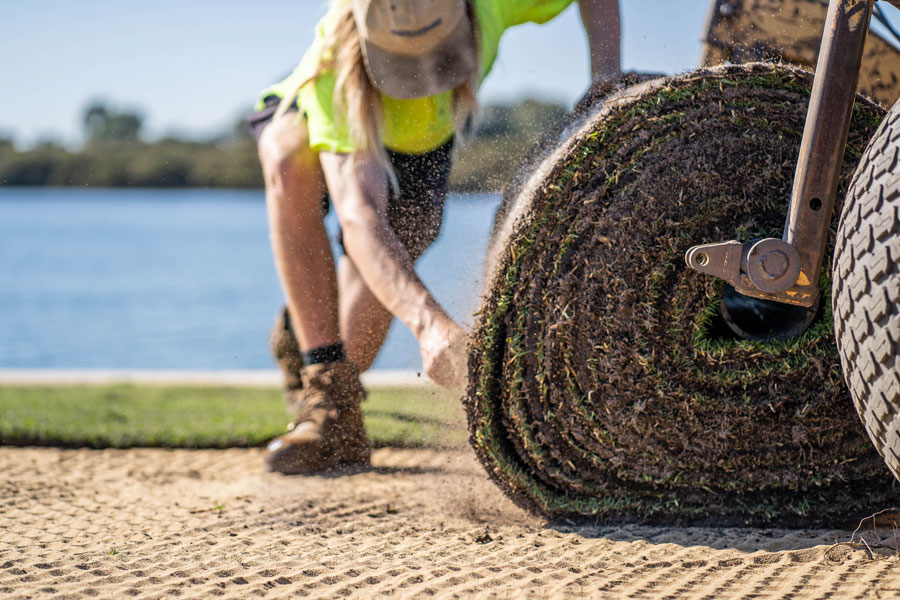 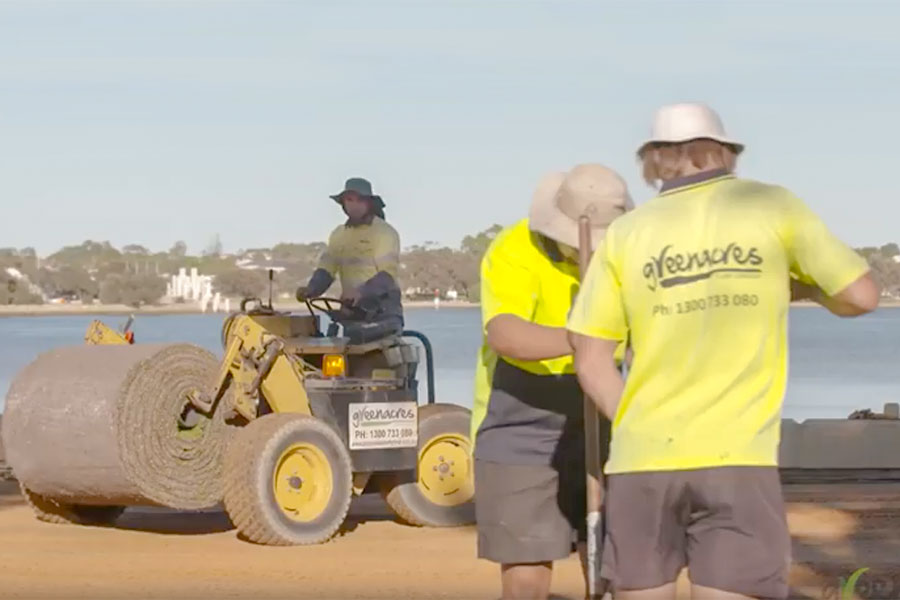 Greenacres secured the tender with the City of Mandurah for the reinstatement of the Mandurah Eastern Foreshore which was completed in February 2017. 6,311m2 of Village Green Premium Kikuyu was installed using Jumbo Roll Technology.

This allowed for a quicker establishment period so that the foreshore was ready to host the Mandurah Crab Festival only 3 weeks later. The job was completed in 5 days by a team of 8 skilled staff members, with a value of approximately $70,000. 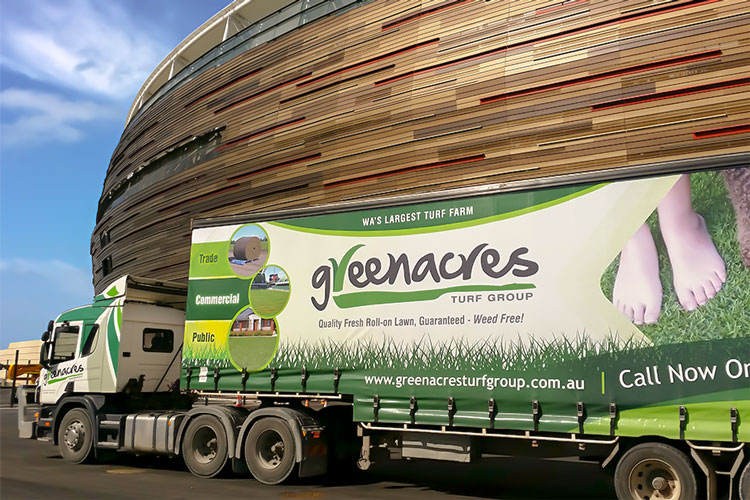 Greenacres was the exclusive supplier for Optus Stadium using the Eclipse Product grown under licence at our Serpentine Farm.

This system was successfully used for HBF Park (formerly NIB Stadium) also in 2013. Over 20,000m2 was installed using Jumbo Roll Technology. Greenacres is HG’s turf farm of choice for the supply and delivery of their high end, high specification product.

Greenacres and HG Sports Turf continue to work together for the specialised services of the turf replacement program at HBF Park (formerly NIB Stadium) and Optus Stadium. 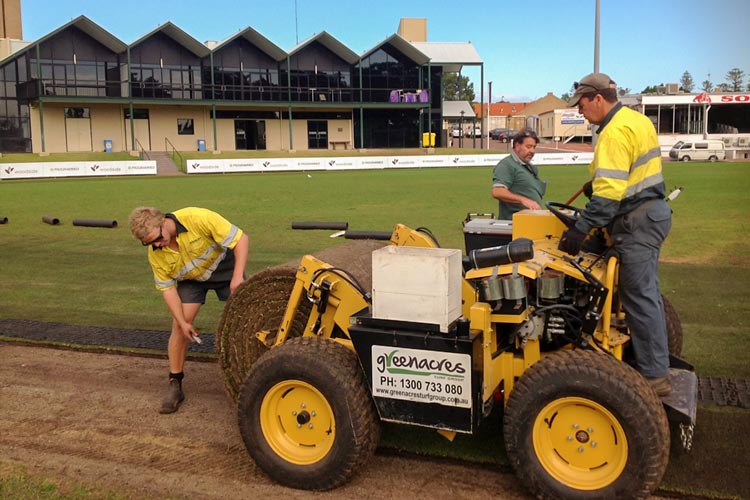 With a tight timeline schedule of only 1 day to get the oval up and running before a big rain event forecast on the Wednesday and a WAFL inspection on the Thursday, our brief was to box out, prepare and lay 8 patches over the oval totalling 525m2 Jumbo Kikuyu rolls.

The project was completed by midday on the Wednesday and passed inspection by the WAFL Thursday lunchtime, ready for the game day on the Saturday. 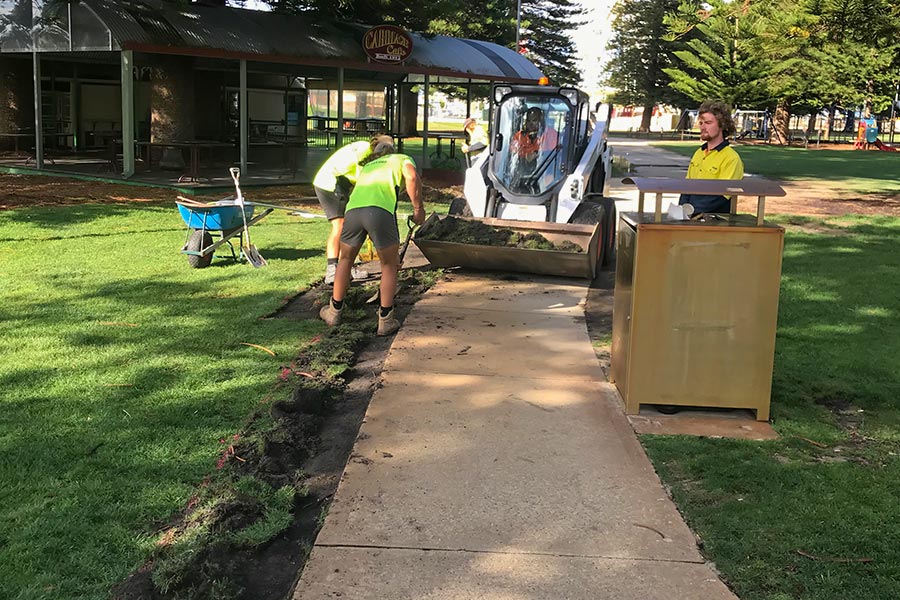 With the end of Term 1 School Holidays approaching the week after, Greenacres had to box out, prepare and lay 1750m2 of turf over various parts of the Esplanade.

The reason for this tight timeline was to ensure the project was completed before the busy holiday fortnight. We implemented Pedestrian Traffic Management, marked out all the areas (20 patches) worked methodically across the Esplanade to minimise disruption to the public, boxing out, removing waste and preparing and laying turf. This was completed in time for the school holidays. 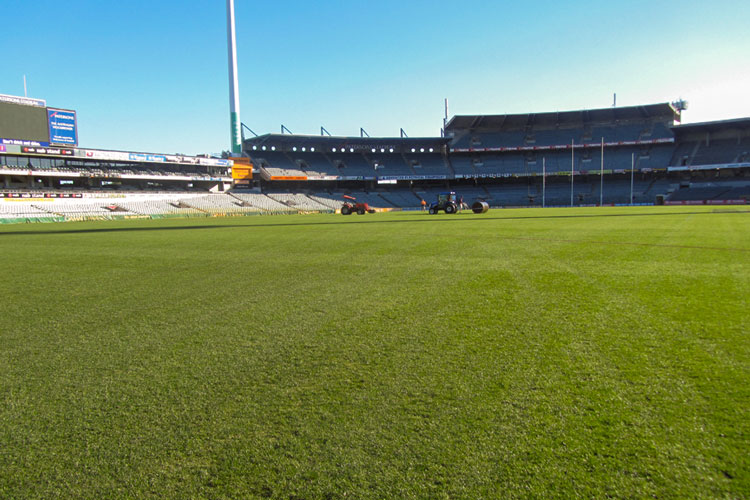 Greenacres Turf Group is the preferred contractor at Domain Stadium for turf replacement during the AFL season. Over the last 6 seasons, Greenacres have replaced goal squares, centre bounce areas and other parts of the oval with a Couch Rye mixed turf.

In February 2017 Greenacres replaced 1,300m2 of Wintergreen Couch Jumbo Rolls after the Guns & Roses Concert and then 1 week later replaced 4,000m2 of Wintergreen Couch Lay and Play Jumbo Rolls after the Adele Concert. Our installation crew worked to a very tight schedule ensuring that the ground was ready for the opening of the new AFL season only a matter of days later. The combined total of the job values was approximately $100,000 plus.

In December 2015 Greenacres Turf Group replaced the entire surface of Domain Stadium. This project involved the removal of the existing turf and profile to a depth of 100mm, excavating the remaining profile, importing 1.6 million kg of PGA spec sand. Consolidating and levelling sand ready for turf and then finally laying 20,000m2 of Lay and Play Jumbo rolls of Wintergreen Couch.

For a better insight view the Today Tonight video.